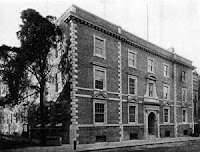 An injured firefighter, Milton Katz of Engine Co. 5, was placed in an oxygen tent at St. Joseph's Hospital, the newspaper said.
Posted by PATERSON FIRE JOURNAL at Friday, May 28, 2010

FIRE LOSS HALF A MILLION

PATERSON, N. J., June 28 -Fire early today swept a block on Main street, from Ward to Market streets, in this city, causing a loss estimated at $500,000. Five firemen were injured by falling walls and others had narrow escapes. Help from outside had to be asked by the local firemen.

The burned buildings include the Van Dyke Furniture company's store, where the fire started; the Linckwood Brother's furniture store building, the Donahue building. Dailey's moving picture house and a number of smaller structures. The burned area is only a block away from the path of Paterson's big fire of 1908.