On May 7, 1934, Paterson firefighters John O'Neill of Engine 9 and Allen Saal of Truck 3 were fatally injured at a fire at the St. Bonaventure Lyceum and parish hall.

"Collapsing walls of the two and a half story brick structure caused all of the injuries," the Paterson Evening News reported. "When they fell they swept firemen from their ladders burying them and their companies on the ground under debris."

Eight other men were hurt, with ​John Murphy, the chief's driver, and John Colligan, a police patrolman, suffering serious injuries.

The fire at Box 413 - at Carlisle Avenue and Ramsey Street - went to three alarms.
Posted by PATERSON FIRE JOURNAL at Friday, February 09, 2018 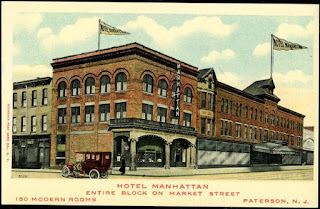 Major fires struck Paterson's Hotel Manhattan on three occasions, one of which resulted it the death of a firefighter.

On May 24, 1920, firefighters used life nets to catch guests leaping from the hotel after a blaze broke out in its laundry room.

Several people were injured, including Firefighter William Smith who ``suffered a severe laceration when he fell 50 feet from a ladder after he had carried a woman and a man to safety,'' according to The New York Times said.

At the 1931 blaze, David Johnstone, engineer of Engine 8, was uncoupling hose when a car plowed through fire lines and struck him down, according to the Paterson Evening News.

The driver, Anthony DeStefano, was charged with reckless driving and atrocious assault.

Four other firefighters - Andrew Swords and Edward Heintzeman of Engine 6, Edward Christensen and John Hill of Engine 9 - were overcome by smoke at the 1931 fire, according to the Paterson Morning Call.
Posted by PATERSON FIRE JOURNAL at Thursday, February 08, 2018