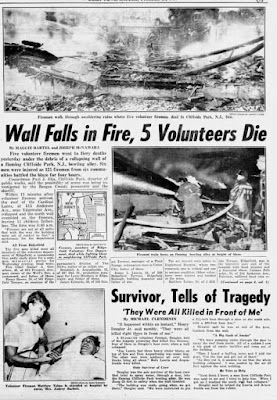 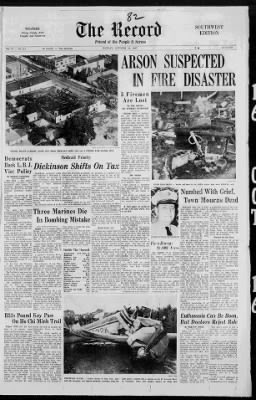 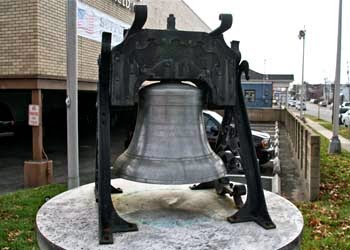 Five members of the Ridgefield Volunteer Fire Department, on a mutual aid run to Cliffside Park, died when a wall collapsed at the Cardinal Lanes bowling alley fire on Oct 15, 1967.

The Ridgefield firefighters were advancing a hose line when the truss roof gave way.

Truss construction is notorious for sudden failure in fires, such as a North Jersey blaze two decades later that killed five Hackensack firefighters on July 1, 1988.

Cliffside Park, N. J. (AP) -- The deaths of five firemen trapped by a collapsing wall leaves 14 children under the age of 21 fatherless. The Ridgefield volunteer firemen also are survived by five widows.

A fire department spokesman said $8,000 had been pledged to a fund for the survivors sponsored by the Hudson Dispatch, a Union City newspaper.

Bergen County authorities say they are investigating the possibility of arson in the fire Sunday at Cardinal Lanes bowling alley in this town just across the Hudson River from New York City. The Ridgefield Fire Department scheduled memorial services for Wednesday.

One civilian and 10 other firemen also were injured when the cinder-block wall collapsed as about 130 firemen from eight communities tried to control the fire in the one-story building.

The civilian and one fireman remained in a hospital today, but their conditions were not serious.

JOSEPH LICATA, a volunteer fireman from Palisades Park, said, "The trapped firemen were just about to enter the building. Then, all of a sudden, the whole place just went 'whoosh' and the flames traveled right down the building from front to back, blowing out the roof and a side wall."

The sole survivor of the hose crew, HENRY DENGLER, JR., 22, said he was at the end of the hose and farthest from the wall.

"We were pumping water through the door to spray the roof from inside," he said. "All of a sudden I saw a big gush of smoke backfire and come out of the building." DENGLER said he heard a "huffing noise" and yelled to the others to cut the hose and "get out of there." The next thing he knew, it seemed as if the whole building had collapsed and he was hurled 25 feet.

He helped dig the bodies out of the rubble.

The dead firemen, all from Ridgefield, were GUSTAVE GENSCHOW, 43, a tavern owner and 27-year veteran of the department; DOMINICK ACQUAFREDDA, 31, an employe of Lever Bros. in Edgewater; HARRY A. BROWN, 26, an employe of the New York Daily News; JAMES EDWARDS, 35, manager of a trading stamp store, and JAMES LAURIA, Ridgefield's building inspector.
Posted by PATERSON FIRE JOURNAL at Tuesday, April 29, 2014