LODI, N.J., April 21— An old chemical plant in the heart of downtown Lodi exploded and burned this morning, killing four workers, injuring eight others, forcing the evacuation of nearby homes and sending a dense plume of toxic black smoke over much of western Bergen County.
The blast at Napp Technologies, which had a history of environmental violations and workplace accidents, was described as an industrial accident, apparently tied to a malfunctioning mixing vat for chemicals. Residents were urged today to keep their windows closed, and their children and pets off the street in case smoke from the plant was dangerous.
Over the last 25 years, many said, there have been several explosions, some minor and some major, that have rocked the block-long row of factories that have housed several chemical companies. One accident in 1973 at the Mallinckrodt Chemical Company killed seven workers.
"How do they let these chemical companies stay right in the middle of town?" asked Linda Tedesco, who lives near Napp Technologies.
Posted by PATERSON FIRE JOURNAL at Friday, January 19, 2018

Assorted 20th Century incidents in Paterson, both major and minor: 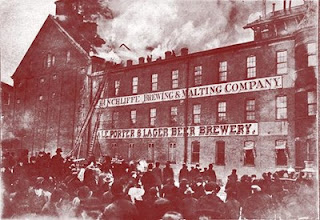 On Jan. 15, 1904, Paterson firefighter Harry Kelley of Engine Co. 7 was fatally injured when a pinewood ladder snapped at a general alarm fire at the Hinchcliffe Brewery.

Captain James O'Neill, who was also on the ladder, suffered injuries.

Box 18 at Straight and Governor streets was transmitted just after 7 a.m. after flames broke out near an elevator of the the fifth floor of the building.

The initial alarm brought horse-drawn Engines 3, 6 and 1 and Truck 3, with the horses struggling to over ice-covered streets to reach the blaze.

The general alarm was a sounded after a roof-top tower holding thousand of  barrels of grain collapsed.

Engine 7, which was usually held in reserve in the south of the city, was added to the call, bring all of the city's fire apparatus to the blaze.

Kelley and O'Neill were manning a ladder pipe aimed at the fourth floor when they met their fate, falling 60 to 70 feet. 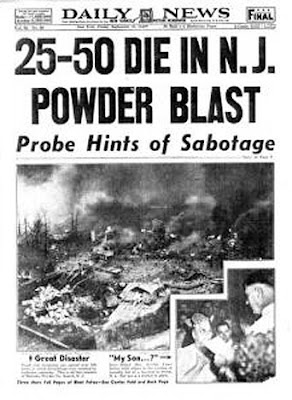 On Sept. 12, 1940, in the buildup to World War Two, an explosion ripped through the Hercules Company munitions plant in Kenvil, Morris County, killing 51 workers and injuring 200 others.

The cause remains a mystery. Sabotage was suspected.

Kenvil, N. J., Sept. 13 (United Press) -- The death toll in the Hercules Powder Company disaster rose steadily today as eight separate agencies sought evidence of sabotage in connection with the explosion and fire which one rescue official said may have taken nearly 100 lives.

By noon 35 bodies, five of them unidentified, had been extricated from the still-smoldering ruins of what had been, up to 1:30 P. M. yesterday, one of the most productive munitions plants in the country.

Sheriff Henry Sperling of Morris County emerged from the plant grounds after a visit of inspection, gestured at the scene of devastation and remarked: "There must be 60 more in there."

W. C. Hunt, operations director of the company, was more conservative, however. He said "probably four or five" more bodies still were buried in the wreckage. The damage was estimated at $1,000,000.

The Army and Navy Intelligence Services, the Hercules Company, state police, the Dies committee, local police, the Federal Bureau of Investigation and the New Jersey Legislature were conducting or preparing to start investigations.

More than 200 men were searching for bodies, aided by a steam shovel. In two nearby hospitals 83 persons, some near death, still were receiving treatment.

The whole smokeless powder section of the plant, where work was being speeded on a $2,000,000 Government defense order, was leveled to the ground. A dynamite-making unit escaped damage, however, and the morning shift of workers filed back to the grounds. Casualties had decimated the plant's force of 1,200 employes, but the survivors were all put to work, making dynamite, clearing debris and hunting for bodies.

The scene was swarming with investigators representing the Army and Navy Intelligence services, the Federal Bureau of Investigation, the Dies committee investigating un-American activities, the New Jersey Legislature and police. Some of the secret agents had come by taxicab from as far as Virginia.

A search of the ruins was delayed by smoldering fires, which had burned fitfully all night, accompanied by puffs of alcohol vapors. Over more than half a square mile hot stones and bricks and molten steel lay in heaps.

Awaiting an opportunity to get onto the grounds, investigators questioned surviving workers, some of whom said that several employees of the Hercules and the Picatinny Army arsenal at Dover, nearby, had been discharged recently as the aftermath of a joint Ku Klux Klan "German" American bund meeting at the bund's Camp Nordland, 10 miles from here.