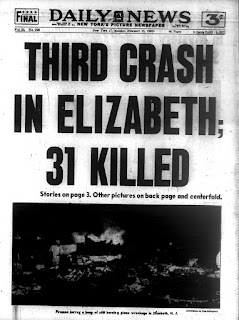 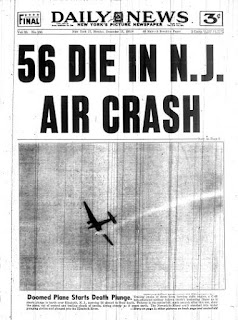 To the superstitious, things sometimes happen in threes.

The City of Elizabeth was the scene of three deadly commercial airline accidents from December 1951 to February 1952.

The flights were  flying into or out of Newark Airport.

Following the third accident Newark Airport was closed until Nov. 5, 1952.

President  Harry Truman appointed a board of inquiry, which led to the establishment of new flight rules for the airport.

So grave were the implications that adjoining Newark Airport, one of the country's biggest and busiest, was shut down immediately "in the light of these tragic events and pending further investigation."

Today's disaster plane was a DC-6 four-engine giant owned by National Airlines. It smashed into a four story apartment house in which 60 families were sleeping, two minutes after its take-off from Newark bound for Miami.
Fifty-nine passengers, including three babies in arms, and a crew of four were on board.

Twenty-four passengers, three crewmen, and three residents of the building were killed.

Thirty-one passengers and nine residents were in hospital, some gravely injured.

In addition, five persons were missing and may prove to be dead. Several passengers and the pretty little stewardess, MISS NANCY TAYLOR, 22, were hardly injured.

The plane crashed two minutes after its take-off and was in trouble practically from the instant its wheels left the runway.

MISS TAYLOR said: "All of a sudden the engines sputtered and stopped and then we went down." A passenger said he saw the propellor of the far right engine turning in reverse.

Other passengers were conscious in the seconds before disaster, of the pilot fighting to keep his plane in the air. Some said he got no higher that a few hundred feet and MISS TAYLOR said it was 1000 to 1500 feet. Then, suddenly, the heavy plane "dropped like a shot," as one passenger put it.
FOSTER jettisoned his gasoline and it showered down on the roof of an apartment house.

The plane wavered on, skimming roof-tops. It barely cleared the roof of an orphanage in which 60 children were sleeping, and smashed into a second apartment house, four and a-half blocks east of the first.
It seemed to explode into fire with the impact, showering flames over the roof of the building. But only the heavy landing wheels and their gear struck the building. Wings and fuselage slid across the roof, flip-flopped, and smashed into the muddy play field of the orphanage.

The flames were licking along the outside of the fuselage, fed from the wing gas tanks. The impact checked them long enough for surviving passengers to save themselves and to rescue some who were injured too severely to move. Passersby rushed into the wreckage and one of them rescued MISS TAYLOR who was hanging upside down from the safety belt which bound her to a "jump" seat.

Meanwhile, the top floor of the apartment house already was roaring with fire. The occupants of the apartment hit directly were killed -- IRVING ZAHLER, 29, his wife, MARYLIN, 27, and their four-year-old son, MONTE.

FOSTER and his co-pilot, C. E. SINCLAIR, were among the dead. The flight engineer, I. R. SHEA, was missing and presumed dead.

The weather had nothing to do with the crash. It was a clear night when FOSTER gunned his big ship down the runway and took off at 12:18 a.m.
It was the third airliner to strike this city since Dec. 16 when an unscheduled four-engine liner crashed in the center of the city but on the bank of the industrialized Elizabeth River, killing its 55 occupants and an Elizabethan on the ground.

On Jan. 22, a two-engine American Airlines Convair smashed into a row of houses while trying to land at Newark on the radar beam in foul weather, killing the 23 persons on board, including former Secretary of War ROBERT PATTERSON, and seven residents of the houses.

Thus Elizabeth's own death toll stood at 11 citizens snuffed out from the sky in less that two months and the wave of indignation which had followed the second crash, was bubbling angrily within minutes after this morning's disaster.

A Congressional sub-committee was to have held a public hearing in Elizabeth Court House this morning to hear Elizabethans argue that any airport operating in the center of a heavily populated area has to be a menace to residents and should be closed.
The New York Port Authority, operators of Newark had prepared elaborate statistics and charts to demonstrate the safety of Newark and had turned them over to the press to be "held for release."

When the hearing was cancelled, the Port Authority called newspapers with instructions to "kill" the presentation. At the same time, it shut down the port.

Two hours after the crash, firemen extinguished the apartment house fire. The top floor was gutted and the injured and the dead came from its apartments. But the whole building had shaken from the impact. Windows had shattered, doors had burst open. And the residents of the lower floors raced pell-mell down the stairs into the street, lugging babies and pets.The fire in the plane wreckage burned itself out sooner. Police roped it off as "a disaster area," to preserve it untouched for investigators.

The investigators was under way quickly. JOSEPH O. FLUET- inspector of the Civil Aeronautics Board in the New York region, rushed to the Union County Courthouse and set up temporary headquarters in the offices of county Prosecutor EDWARD COHN. His first move was to impound all records of the plane and passengers.

Because the pilot jettisoned gasoline, indicating an emergency demand to lessen weight, FLUET revealed that the plane's manifest gave its take-off weight at 83,437 pounds. The maximum allowable take-off weight for a DC-6, FLUET said, is 86,150 pounds. The maximum permissible landing weight is 75,000 pounds, he added and pointed out that the gasoline consumed in a flight to Miami would have lowered the plane's weight well below the top limit.

On Jan. 31, Capt. EDDIE RICKENBACKER, president of Eastern Air Lines, said in a press conference called by the Air Transport Association that Newark was "a preferred airport" to pilots under any weather conditions. He said that in most pilots opinion "it is the best situated, the best equipped, and the safest airport in the entire country."

Ten pilots representing five airlines confirmed the statement. They said their personal choice in bad weather always would be Newark.

But figures and talk had little effect on the people of Elizabeth. Indignation, which had run in angry undercurrents through the city, after the first two crashes, boiled to the surface.
Angry neighbors gathered outside homes in the early morning hours.

"This is the last straw; how much more can we talk?" one man shouted.
Posted by PATERSON FIRE JOURNAL at Thursday, February 26, 2015